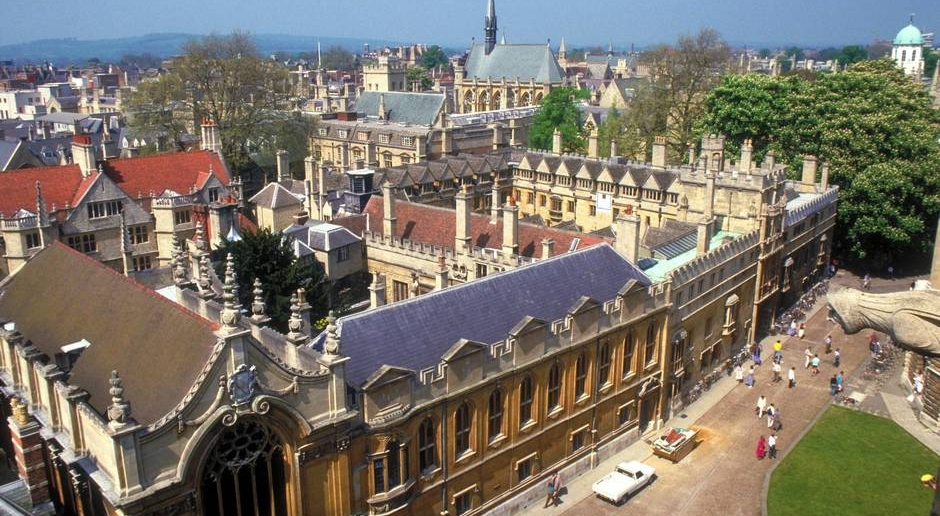 Oxford is the larger of the two and has more of a city feel, with its own identity outside the university. That said, there is no doubt that the university – the oldest in the English-speaking world – and its 38 colleges predominate in the city of ‘dreaming spires’, as described by the Victorian poet Matthew Arnold.

Places of interest in the city are myriad, but some of the highlights include the Sheldonian Theatre, Sir Christopher Wren’s first major building, the Bodleian Library, the Radcliffe Camera and the Ashmolean, one of Britain’s most renowned museums. Balliol, University and Merton are the oldest colleges, but Christ Church, founded by Cardinal Wolsey in 1524, is arguably the grandest and can count 13 prime ministers among its alumni. Most colleges are open to the public.

This year, Oxford is celebrating the 400th anniversary of Shakespeare’s death with a wide-ranging cultural programme of exhibitions and performances.

Cambridge is a more tranquil city. The university is smaller, with around 18,000 students to Oxford’s 26,000, but with its exquisite colleges and beautiful environment it is every inch Oxford’s rival. From the ‘Backs’ (the grounds of the colleges such as St John’s, Queens’ and Magdalene that abut the River Cam) to the neoclassical Fitzwilliam Museum, replete with treasures from antiquity and works by Leonardo, Titian and other Renaissance artists, to the Gothic masterpiece that is King’s College Chapel, Cambridge is unquestionably first class. The ‘Fitz’ is celebrating its bicentenary this year and is staging a number of events throughout the year.

In contrast to Oxford and Cambridge are the northern ‘red brick’ university cities of Liverpool and Manchester, which provide a seductive mixture of grit, glamour and grandeur. Their universities, founded in the last years of the Victorian era, originally concentrated on practical skills such as engineering, as opposed to the liberal arts and divinity of Oxbridge. This no-nonsense remit is emblematic of both cities, which lie only 50 kilometres apart in Lancashire.

Manchester is, if nothing else, what one might term ‘brassy’. Mancunians are not backward in coming forward in telling you about their city’s qualities, which are manifest. Home to the Halle Orchestra, the Royal Exchange Theatre, a significant China Town and gay village, Coronation Street, Salford Quays (which includes The Lowry gallery) and the Imperial War Museum North. Let’s not forget the John Rylands Library, decades of musical talent – such as Factory Records, New Order, and Oasis – and, oh yes, two famous soccer teams – City and United.

Manchester’s great civic and sporting rival, Liverpool, is no longer the down-at-heel city of the 1970s and 80s; it boasts some of the best museums and galleries outside London, including the Walker Art Gallery and the Tate Liverpool. A certain pop group called The Beatles hailed from the city, and a must-see is The Beatles Story, a museum telling the Fab Four’s story, as well as tours of the Cavern Club where John, Paul, George and Ringo first played.

VISITBRITAIN
The entrance to the Cavern Club in Liverpool.

There is architectural grandeur in the form of the ‘Three Graces’ – the Port of Liverpool, Royal Liver and Cunard buildings. If you like your soccer, like Manchester, there are two equally storied teams: Liverpool and Everton. All this served with a helping of the renowned Liverpudlian, or ‘scouse’, wit. The university’s Victoria Building, designed by Alfred Waterhouse in a Gothic Revival style and opened in 1892, and now the Victoria Gallery and Museum, can lay claim to being the inspiration of the term ‘red brick’.

ROD EDWARDS/ONE NORTH EAST/VISITBRITAIN
The Norman Cathedral can be seen over the rooftops of Durham.

In England’s storied north-east is Durham, one of the country’s oldest universities in one of its most stunning settings. The cobbled streets of this distinguished university city are dominated by the magnificent Norman cathedral constructed over 40 years to 1133. Built in a Romanesque style, it is one of the country’s great buildings. The part of the Palatinate on which it stands includes Palace Green, the Castle (which is also a university college), the Bailey and various historic bridges, and is a World Heritage Site.

VISITBRITAIN
The interior of the University of Aberdeen’s library, which was designed by Schmidt Hammer Lassen.

Cross the border into Scotland for much of interest and one or two surprises. Did you know that Aberdeen, as well as being the centre of Britain’s oil industry, is home to its fifth oldest university, founded in 1495? Nestled near the post-Reformation splendour and cloisters of King’s College is the Sir Duncan Rice Library, a significant piece of modern architecture designed by Schmidt Hammer Lassen and winner of a 2013 Royal Institute of British Architects prize.

VISITBRITAIN
The RSS Discovery acting as a landmark during the Commonweath Games in Glasgow in 2014.

Dundee, nestled on the River Tay, is one of Britain’s best-kept secrets and famous for the three Js: jute, jam and journalism. Winston Churchill was the city’s MP between 1908 and 1922. The jute production, long since gone, provided sailing cloth for whaling ships that sailed from the port in the 19th century. It was also where the Discovery, the ship that carried Captain Scott and Ernest Shackleton on their maiden voyage to the Antarctic, was built and launched in 1901. It is now a major attraction at Discovery Point along with the Verdant Works jute museum. They will be joined in 2017 by the V&A Museum of Design Dundee, a sister to the London V&A; this major new building on the waterfront has been designed by Japanese architect Kenzo Kuma and will add to the city’s list of cutting-edge architecture. Dundee University, frequently lauded as Scotland’s best, and a world leader in biosciences, has a campus that has been designed in part by Sir Terry Farrell. It is also the home of legendary comics Beano and Dandy, the latter sadly no longer, though there is a statue of Desperate Dan, its best known character, in the city centre.

Cross the Tay for a 10-mile hop to St. Andrews, a handsome seaside town that houses the University of St Andrews. Founded in the early 15th century and the third oldest in the English speaking world, after Oxford and Cambridge, it is one of Britain’s academic powerhouses. The town is home to the Royal and Ancient Golf Club, which frequently stages the British Open. The heir to the throne, the Duke of Cambridge, attended the university and met his future wife Kate Middleton there. Film buffs may recall the unforgettable opening scene of the Chariots of Fire athletes running along the seashore to the strains of Vangelis. That was the local West Sands beach.

VISITBRITAIN
Looking out over Edinburgh from Calton Hill in the centre of the city.

Let’s not forget the ‘Athens of the North’: Edinburgh. Find any reason you can to visit the capital city of Scotland; it has some of the grandest, handsomest buildings you will find in Britain, including the Queen’s residence, the Palace of Holyroodhouse, which is opposite the new Scottish Parliament, designed by Spaniard Enric Miralles and opened in 2004. Edinburgh, or ‘Auld Reekie’ to some of its inhabitants, has dramatic vistas everywhere you look, from Arthur’s Seat to the Castle to the grand New Town, which tumbles down to the Firth of Forth. Every August it stages the biggest and most renowned arts and fringe festival in the world. The university is mainly situated in the Old Town; it has a distinguished history in medicine and, perhaps not surprisingly as the city of the infamous murderers Burke and Hare, has an Anatomical Museum. If you are not too squeamish, this is open to the public on the last Saturday of every month.

A touch of Rome

VISITBRITAIN
The roman baths at Bath.

If cities were supermodels, Bath would be up there on the catwalk. In England’s south-west, it’s a beautiful city of under 90,000 souls and a World Heritage Site. It was occupied by the Romans in the first century AD and was formerly known as Aquae Sulis. The baths are thought to be one of the best preserved Roman remains in the world. The ancient world sits alongside the Georgian delights of the Circus and Royal Crescent. This vibrant, small city is also home to two universities, Bath and Bath Spa. The former is from the generation of British universities founded in the early 1960s, known as ‘Plate Glass’ universities. Bath Spa can trace its origins to Bath School of Art and the 1850s, and the grounds of its Newton Park campus were designed by Capability Brown.